A novel might have taken me to Coventry, but by a strange symmetry it was after visiting Colchester I began reading a novel that mentions, even features, some of the places I saw in the original capital of Roman Britain.

I had unfortunately sprained my ankle just a few days beforehand, so my explorations were not quite as extensive as I should have liked. Still it gives me a good excuse to return.

I have visited many other parts of Essex, and even celebrated a birthday in and around Wivenhoe a few years ago when friends joined me for an easy eight mile walk which started, middled and ended at the pub.

Colchester boasts an impressive castle, a ruined abbey, and an astounding building that is home to the Museum of Modern Art. 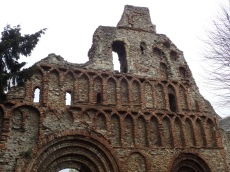